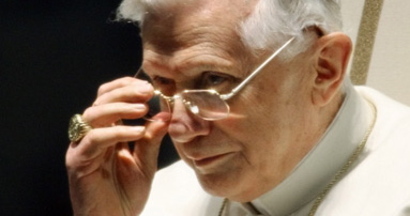 And it's on this insistence that Benedict is saying something quite striking about Islam. Benedict insists on the Greek "logos" as inherent in the Christian tradition, and "logos" demands a freely chosen faith, and certainly not a faith imposed by violence. What's striking to me about Benedict's account of Islam is his suggestion that compulsion and violence are not extrinsic to Islam but intrinsic to its vision of humankind's relationship with the divine. He began his homily by referring to a "dialogue carried on - perhaps in 1391 in the winter barracks near Ankara - by the erudite Byzantine emperor Manuel II Paleologus and an educated Persian on the subject of Christianity and Islam, and the truth of both." At the core of the divide is the role of logos - reason - in faith. If reason is not intrinsic to faith, then violent imposition of religion is possible, even mandatory:

In the seventh conversation ("di√°lesis" - controversy) edited by professor Khoury, the emperor touches on the theme of the jihad (holy war). The emperor must have known that sura 2:256 reads: "There is no compulsion in religion." It is one of the suras of the early period, when Mohammed was still powerless and under [threat]. But naturally the emperor also knew the instructions, developed later and recorded in the Koran, concerning holy war.

Without descending to details, such as the difference in treatment accorded to those who have the "Book" and the "infidels," he turns to his interlocutor somewhat brusquely with the central question on the relationship between religion and violence in general, in these words: "Show me just what Mohammed brought that was new, and there you will find things only evil and inhuman, such as his command to spread by the sword the faith he preached."

The emperor goes on to explain in detail the reasons why spreading the faith through violence is something unreasonable. Violence is incompatible with the nature of God and the nature of the soul. "God is not pleased by blood, and not acting reasonably ("syn logo") is contrary to God's nature. Faith is born of the soul, not the body. Whoever would lead someone to faith needs the ability to speak well and to reason properly, without violence and threats ... To convince a reasonable soul, one does not need a strong arm, or weapons of any kind, or any other means of threatening a person with death...."

The decisive statement in this argument against violent conversion is this: Not to act in accordance with reason is contrary to God's nature. The editor, Theodore Khoury, observes: For the emperor, as a Byzantine shaped by Greek philosophy, this statement is self-evident. But for Muslim teaching, God is absolutely transcendent. His will is not bound up with any of our categories, even that of rationality. Here Khoury quotes a work of the noted French Islamist R. Arnaldez, who points out that Ibn Hazn went so far as to state that God is not bound even by his own word, and that nothing would oblige him to reveal the truth to us. Were it God's will, we would even have to practice idolatry.

As far as understanding of God and thus the concrete practice of religion is concerned, we find ourselves faced with a dilemma which nowadays challenges us directly. Is the conviction that acting unreasonably contradicts God's nature merely a Greek idea, or is it always and intrinsically true?

Benedict's answer is that it is always and instrinsically true. Which means that, without fundamental reform, without a Muslim reformation, a central part of Islam is always and intrinsically false. And it is this divide that lies at the heart of our current civilizational conflict. This seems to me to be the Pope's message. In the current climate, it is an inflammatory but courageous one.