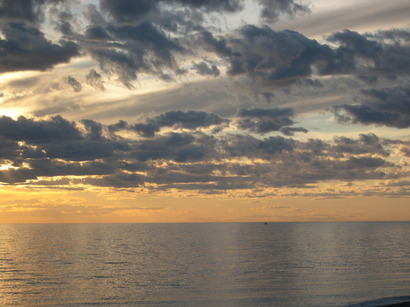 I can only commend the Pope's latest homily on the great philosophical question of our day: the relationship between faith and reason, as it has unfolded in human history. I need more time to digest it, but its clarity and openness are welcome. I just finished reading "The End of Faith" by Sam Harris, and found much in it that stimulated and engaged and even inspired. On the dangers of an anti-rational fundamentalism in religion, I recommend the book heartily. But it is, I'm afraid, too glibly dismissive of "the whole" to be persuasive, too deaf to the myriad ways in which faith can interact and be strengthened by what the Pope calls "logos", the word, reason itself. This reasoned faith, in order to exist, must include doubt and skepticism and the earnest search for truth, which, in turn, must necessarily never conflict with God. Doubt is not an obstacle to faith; it is necessary for faith to exist at all.

Benedict's message about faith and reason is a deep and complicated one, and necessarily compressed in the homily. But this passage struck me as particularly profound, and it concerns Benedict's deep distrust of the Enlightenment:

[T]he fundamental decisions made about the relationship between faith and the use of human reason are part of the faith itself; they are developments consonant with the nature of faith itself.

This attempt, painted with broad strokes, at a critique of modern reason from within has nothing to do with putting the clock back to the time before the Enlightenment and rejecting the insights of the modern age. The positive aspects of modernity are to be acknowledged unreservedly: We are all grateful for the marvelous possibilities that it has opened up for mankind and for the progress in humanity that has been granted to us. The scientific ethos, moreover, is the will to be obedient to the truth, and, as such, it embodies an attitude which reflects one of the basic tenets of Christianity.

The intention here is not one of retrenchment or negative criticism, but of broadening our concept of reason and its application. While we rejoice in the new possibilities open to humanity, we also see the dangers arising from these possibilities and we must ask ourselves how we can overcome them.

I wish Benedict spoke in this conciliatory and open tone more often. And that he would concede that on some deep issues, like end- and beginning-of-life debates, other voices than the absolutist one he has embraced have things to contribute. The same, of course, with human sexuality.

We will succeed in doing so only if reason and faith come together in a new way, if we overcome the self-imposed limitation of reason to the empirically verifiable, and if we once more disclose its vast horizons. In this sense theology rightly belongs in the university and within the wide-ranging dialogue of sciences, not merely as a historical discipline and one of the human sciences, but precisely as theology, as inquiry into the rationality of faith.

The rationality of faith: now there's a concept we need to breathe new life into in a world where religion is too often described as an irrational leap or "submisson" to an illogical God.