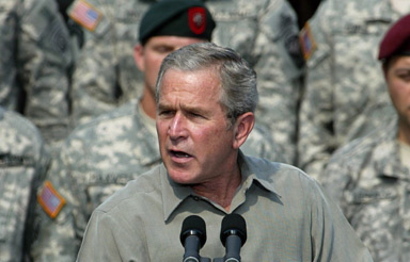 I, perhaps like many, was shocked to see the ABC News report on "Jesus Camp." Certainly the existence of an evangelical youth movement is not news to me, nor is the strong alliance between the Republican party and American evangelicals. What was new was that young Christians worship at the image of the President. How can this practice be considered Christian, or even within the Judeo-Christian tradition? I know of no sect of Christianity that has beatified or canonized President Bush as a living saint - in the mainstream traditions I am familiar with, such reverence is reserved for the departed. This practice seems to displace the divine with the human, and I have difficulty understanding how anyone calling themselves Christian can bow to worship a political leader, no matter how much he or she agrees with that leader's politics.

I fear it is only the natural evolution of a movement that has fused inerrant Biblical truth with a political party. There is a great need within such cults for a great leader to venerate and worship. Christianity has been prone to such perversions in the past. And so the leadership-cult around Bush is not that surprising. From a Southern woman recently quoted in a CNN piece:

"There are some people, and I'm one of them, that believe George Bush was placed where he is by the Lord. I don't care how he governs, I will support him. I'm a Republican through and through."

This is how "Christians" can come to be motivated by the cause of torture (a position one might say the Gospels are opposed to), and how they come to believe, in the words of Charles Krauthammer, that torture is a "moral necessity". Once you have abandoned all reason to faith, and when that faith is merged into a mass political movement, energized by mass, hysterical rallies where children are indoctrinated, it is quite clear the kind of fire you're playing with. But Rove and Bush are about power. And there's nothing quote so powerful as a mass movement with a leadership cult. Check the history books. Then check the current polls. And do the math. Rove is very good at math.