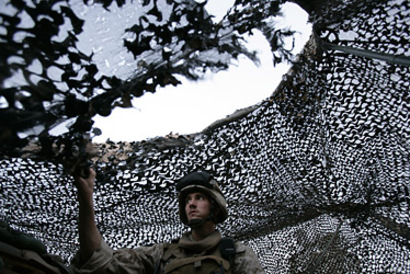 While the media is obsessed parsing the ad libs of someone on no ballot this fall, something truly ominous has just happened in Iraq. The commander-in-chief has abandoned an American soldier to the tender mercies of a Shiite militia. Yes, there are nuances here, and the NYT fleshes out the story today. But the essential fact is clear. In a showdown for control of Baghdad, the Iraqi prime minister took orders from Moqtada al-Sadr, and instructed the U.S. military to withdraw from Sadr City. The American forces were trying both to stabilize the city but also to find a missing American serviceman. He is still missing. Money quote from the WaPo:

The move lifted a near siege that had stood at least since last Wednesday. U.S. military police imposed the blockade after the kidnapping of an American soldier of Iraqi descent. The soldier's Iraqi in-laws said they believed he had been abducted by the Mahdi Army as he visited his wife at her home in the Karrada area of Baghdad, where U.S. military checkpoints were also removed as a result of Maliki's action.

The crackdown on Sadr City had a second motive, U.S. officers said: the search for Abu Deraa, a man considered one of the most notorious death squad leaders. The soldier and Abu Deraa both were believed by the U.S. military to be in Sadr City.

The U.S. military does not have a tradition of abandoning its own soldiers to foreign militias, or of taking orders from foreign governments. No commander-in-chief who actually walks the walk, rather than swaggering the swagger, would acquiesce to such a thing. The soldier appears to be of Iraqi descent who is married to an Iraqi woman. Who authorized abandoning him to the enemy? Who is really giving the orders to the U.S. military in Iraq? These are real questions about honor and sacrifice and a war that is now careening out of any control. They are not phony questions drummed up by a partisan media machine to appeal to emotions to maintain power.

And where, by the way, is McCain on this? Silent on Cheney's "no-brainer" on waterboarding. Silent recently on Iraq. But vocal - oh, how vocal - on Kerry. It tells you something about what has happened to him. And to America.

(Photo of an American soldier in Iraq - not the missing guy - by Yuri Kozyrev for Time.)