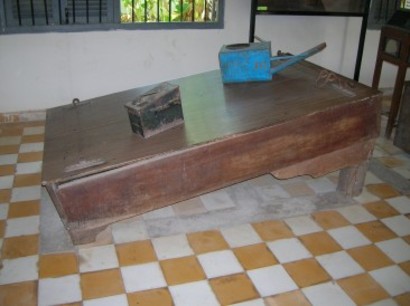 Here's a fascinating dialogue with Ed Meese on his view of the interrogation techniques initiated by this White House. It's fascinating because it reveals wilfull ignorance of what's going on and a relentless incuriosity about it. I think this has typified many Republican partisan responses to the question of torture.

Wil S. Hylton: Another outcry lately has been over the uses of interrogation techniques that involve sleep deprivation and uncomfortable positions. Do you think that the Bush administration has pushed the boundaries on that?

Ed Meese: I don't know. A lot of this has been classified. There have been a lot of accusations, but I haven‚Äôt seem much evidence, so I really don‚Äôt know enough to render a judgment. But my own belief is that the administration is committed not to engage in anything that we would call torture. They‚Äôre committed to humane treatment.

EM:  Well, again, I have a great deal of confidence that the administration would not engage in torture.

WH:  Would you call that torture?

WH:  It's putting a wet rag over someone's mouth and making them think that they‚Äôre going to drown.

WH:  That doesn't necessarily sound like torture to you?

EM:  I don't know whether they're doing that.

WH:  I'm asking, if that is what they're doing, does that sound like torture?

EM:  Well, I'd have to find out how long they do it and whether it does create the impression of drowning. I've never heard of this using a washcloth in their mouth before.

As Edmund Burke once remarked, "The only thing necessary for evil to flourish is for good men to do nothing." And nothing they have done.