Poking Fun At The Pope 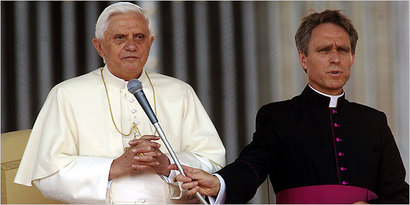 The NYT runs a very curious article today about Italian humor about the current Pope. None of the jokes cited seem to me to be very risque or even funny. The entire argument of the piece is undermined by lack of any real evidence that this pope is subject to any more ridicule than has historically been the case. Except of course for that photograph (see above). It shows the source of the actual jokes circulating in the Vatican and elsewhere about this Prada-preferring, Gucci-wearing, high-drama German intellectual. The actual jokes - which the NYT won't print - are about how good looking so many of the men are who surround Benedict, especially his personal assistant, Msgr. Georg G√§nswein, shown holding the large phallic microphone in front of Benedict's face. The Vatican gossip merchants call Georg "Gay-Org." He is inseparable from Benedict. And he surely is easy on the eyes. There is no evidence that Benedict has ever broken his vows of chastity; but there is no evidence that he is heterosexual either. Hence the gossip; hence the jokes. When you're a Pope who declares that even closeted, chaste gay men cannot be priests, it's pushing your luck to clothe yourself in Prada, bedeck your Pope-mobile with luxurious Natuzzi Italian white leather, and surround yourself with assistants who look like they strayed from the pages of "L'Uomo Vogue."

Butch it up, sister. Or the jokes will only get louder.

(Photo of pontiff and Georg by Franco Origlia/Getty.)