The Sanity of Luttwak 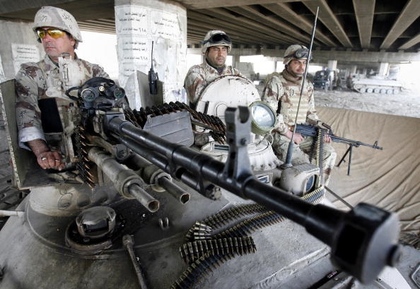 Once the decision was made to foment anarchy in Iraq - a decision made with clear foresight by Donald Rumsfeld, George W. Bush and Dick Cheney - the chance of Americans to influence events in a country they don't begin to understand was thrown away. The great delusion of the pathetic rearranging of deck-chairs called "the surge" is that we are somehow supposed to believe that four years after we abandoned control of Iraq, we can regain it with a handful of new troops. We can't. A civil war is underway in Iraq to test the real power of the various factions and sects in the country. There will be no peace until such a rebalancing of power is finished. That will mean, alas, ethnic cleansing, more violence, hideous atrocities and the risk of regional war. So be it. It's already under way under American occupation; the only problem is that young Americans are - ludicrously - supposed to police it.

The alternative, sane option is laid out with characteristic lucidity today by Edward Luttwak in the NYT. It is to withdraw to the borders, Kurdistan or distant bases within Iraq and allow the war to sort itself out. Only then will real power-brokers emerge able to make a real deal; only then will the future of the deserts and cities of Iraq find a new political settlement. The only thing preventing this from occurring is president Bush's pride and stupidity. But Iraq and America have each suffered both signature characteristics of George W. Bush for longer than either deserve. It's long past time to cut our losses and acknowledge reality.

Would this lead to a regional war? It's perfectly possible. But it could also lead to the powers of the region actually acting in rational ways to achieve a new and more stable balance of power. The culture of dependency on U.S. security guarantees has not helped Muslim moderation or Middle East peace over the last two decades. Such dependency gave us al Qaeda and 9/11. Slowly weaning the Saudis and Egyptians off such dependency could be a healthy move. Already, the Saudis, in the wake of U.S. withdrawal, are countering Iranian influence in the region with far more skill and sophistication than the Bush administration ever could. The U.S can still be a major player from the margins - just not the regional hegemon in the center.

This is the silver lining of Iraq's disintegration. It could help rearrange the region to a more stable balance of power. It could do so by a brutal regional war; or by a slow, intermittently violent process of terror, diplomacy and strategic positioning. Either way, the less the U.S. is directly involved in one side or another, the more options we retain for the future. Disengagement, in other words, is defeat. But it is defeat in a war we have already lost. It could mean a gain in a war that is only just beginning. Which could mean victory in the end, whatever victory at this point can be understood to mean.

Previous The Ranks Close | Main | Whitman in the Atlantic Previous